Readers of works of literature from the mid 20th century might notice that food seems to play a particularly important role in many stories of the time. Later in The Lord of the Rings a clue to this is given by Beregond of the Guard of the Tower in conversation with Pippin. Pippin is anxious to find something to eat after his uncomfortable interrogation by the Lord Denethor. Beregond regretfully informs a rather disappointed Pippin that he has already broken his fast as well as any in the city but adds “They say that men who go warring afield look ever for the next hope of food and drink”.

The Lord of the Rings was written largely through a time of food rationing. Hobbits, in particular, are creatures of feast and fast and have a particular enthusiasm therefore for feasting. The description of the food and drink at Bilbo’s party is full of delight and pleasure.

Last week’s reflection led to a lively conversation in the Comments Section on Gandalf’s relationship with the Shire. The debate centred on whether Gandalf acted in the way he did in the Shire as a strategy to win the hearts of the hobbits or whether it was all unplanned and entirely providential. I think that eventually it was agreed that Gandalf did consciously seek to warm the hearts of those among whom he travelled. It was this quality that first drew Círdan of The Grey Havens to him. Círdan gave the Ring, Narya, to Gandalf, saying “Take this ring, Master… for your labours will be heavy; but it will support you in the weariness that you have taken upon yourself. For this is the Ring of Fire, and with it you may rekindle hearts in a world that grows chill.” 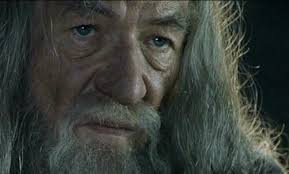 Gandalf walks the lonely roads of Middle-earth doing just this work so that when Sauron begins his great war to regain the One Ring and to achieve mastery he is opposed by all the free peoples despite his efforts to divide them. But I would add something more and that is that the hobbits touch and awaken something in Gandalf’s heart too. They teach him how to play. It would be hard to imagine Elrond of Rivendell or Dáin of Erebor or Denethor of Gondor playing in the way that Gandalf does. I could imagine Galadriel dancing among hobbit maidens but it would be a queenly dance.

Gandalf is not lordly when he is in the Shire. He is childlike in the way in which a grandfather is childlike. He has seen life and he has been marked by it. From the Lady Nienna he has learned pity. From hobbits he has learned pleasure. And he knows that deeper even than sorrow lies a joy that cannot cloy. 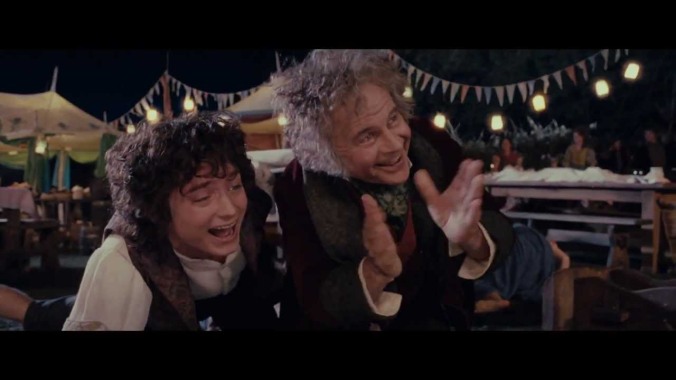 “The fireworks were by Gandalf: they were not only brought by him, but designed and made by him; and the special effects, set pieces, and flights of rockets were let off by him. But there was also a generous distribution of squibs, crackers, backarrappers, sparklers, torches, dwarf-candles, elf-fountains, goblin-barkers and thunder-claps. They were all superb. The art of Gandalf improved with age.”

I would encourage readers to read that passage aloud and to savour each word and sound. Each name of a firework is meant to be musical but it is not the music of Elrond’s halls but the music of a country party with lots of laughter and a little mischief too. Peter Jackson captures this well in his films by introducing the characters of Merry and Pippin here. Their soot covered faces as they emerge from the smoke of the exploded rocket, one of Gandalf’s hands tightly gripping each of their curly heads, conveys this well. 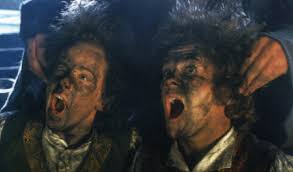 A serious life can be a playful life too. Rowan Williams describes his friend and colleague, Archbishop Desmond Tutu in this way, saying that Desmond Tutu loves being Desmond Tutu. The same man who risked his life in the struggle against apartheid and who wept openly as he listened to the many stories of suffering during the time that he chaired South Africa’s Truth and Reconciliation Commission, also knows how to enjoy a good party.

Near the end of The Lord of the Rings Gandalf announces to the four Travellers that he is going to visit Tom Bombadil for a good long talk. I suspect that a lot of that talk was full of laughter.