If Sauron were leader of the Fellowship, setting out from Rivendell in possession of the Ring, what would he do? Gandalf knows that it is a question that Sauron has asked himself. Sauron knows that the Fellowship left Rivendell and that they possessed the Ring. He knows something of each member of the Fellowship and that there are hobbits among them. And Gandalf knows that he fears that the Fellowship will go to Minas Tirith and there one of them will wield the Ring, assail Mordor with war, cast him down and take his place. Boromir counselled  that they should go to Minas Tirith but not that one of them should wield the Ring. He hid this desire even from himself.  And Gandalf and Galadriel were tempted to wield the Ring as well. Remember the occasions when Frodo offered the Ring to them, first to Gandalf at Bag End in the Shire and later to Galadriel in Lothlorien. Remember that both were tempted to the very limits of their strength to take it and seek to use it to cast Sauron down. Sauron knows that both have the capacity to do this and so he is afraid. He will unleash war against Minas Tirith as swiftly as he can before his enemies are strong enough to use the Ring to destroy him.

What if Sauron is wrong? What if, as Gandalf says, “we should wish to cast him down and have no one in his place?” This not is a thought that “occurs to his mind”. And Gandalf continues: “that we should try to destroy the Ring itself has not entered into his darkest dream.” Indeed Sauron is incapable of dreaming such things. Our dreams, whether waking or sleeping, are the fruit of our spiritual practice. By this I do not mean our religious practices although they can be of help to us in the shaping of our spiritual practice. What I mean is how we cultivate our desire. For Gandalf and Galadriel desire is a deeply complex thing. On the one hand they long to heal the world, to right wrongs and set things right. On the other hand the thought that the power to do this might fall into their hands and that they might be the heroic saviours of the world with all flocking to their banner is deeply attractive. You will note that Boromir desired the same thing. But Sauron does not suffer this agony. He has a different agony because for him only one thing has meaning and that is power over others for it is only power that can free him from the fear that haunts him, his agony that never leaves him, the fear that one day someone will have the power to destroy him and take his place.

Unhappy is Sauron and all like him who do not know this struggle, whose spiritual lives are simple, having been reduced to the pursuit of one desire. Kierkegaard once said that simplicity is to will one thing and he is right. Perhaps it is possible to achieve such simplicity in pursuit of the good. There are signs in The Lord of the Rings that Gandalf and Galadriel have achieved such simplicity. Jesus finally achieves it at the moment when he says, “Father into your hands I commend my spirit.” But if it is achieved then it is a victory won as the fruit of a renunciation that is a profound struggle that tests them and everyone who pursue such simplicity to their limit and beyond. 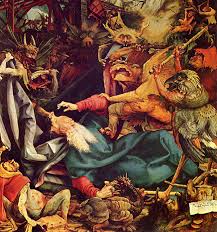 The Temptation of St Anthony

This has to be a word of hope to all of us who struggle. Our struggle should not be a cause of pity in others. Rather others should pity us only if we give up fighting. But more of that next week.

14 thoughts on “Happy are Those Who Struggle”