It is some weeks since this blog reflected upon the adventures of Aragorn, Gimli and Legolas, and their pursuit of the captors of Merry and Pippin across the wide plains of Rohan. It has been longer still since we thought about Aragorn’s inner turmoils after the fall of Gandalf; how he was torn between his longing to go to Minas Tirith with Boromir to aid its people in the wars against Mordor and his sense of responsibility to Frodo, the Ringbearer. I wrote about the day when Aragorn ran uselessly here and there as Boromir first tried to sieze the Ring from Frodo and then fell alone in battle trying to protect Merry and Pippin from the orcs of Isengard. 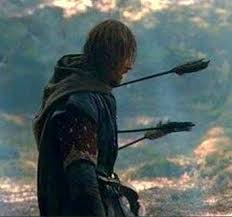 I wrote about the moment when he crashed through the trees into the glade, wielding the mighty sword of his glorious ancestors that had cut the Ring from the hand of Sauron, crying “Elendil”  he did so and finding that the battle was already at an end. At that moment Aragorn was in despair. http://www.stephenwinter.net/page6.htm#140191

“This is a bitter end. Now the Company is all in ruin. It is I that have failed. Vain was Gandalf’s trust in me. What shall I do now?”

The choice that he makes at that moment is one that takes him away, both from the Quest of the Ring and from his longing to fulfill the promise to Boromir to go to Minas Tirith. He chooses to follow Merry and Pippin, the two members of the Company, who, until that point in the story, have contributed least to their task. Any utilitarian assessment of the greatest good at the moment when he makes his choice would tell him that regretably he must abandon Merry and Pippin to their fate and that at least their deaths might be worthwhile if the Ring can be destroyed and Minas Tirith be delivered. But Aragorn is no utilitarian and neither is he a soft-hearted or, might we say, soft-headed sentimentalist. He chooses to trust Frodo’s choice to go on alone knowing that the Council have entrusted him with the task of destroying the Ring. And he cannot go to Minas Tirith having abandoned his comrades. He will follow them even if the pursuit is in vain. 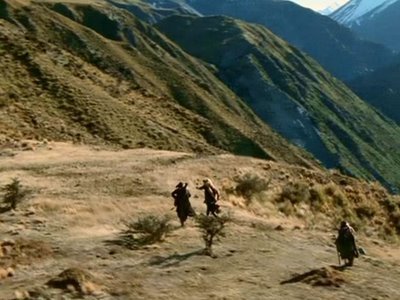 In one sense the pursuit, though heroic, is indeed in vain. It is not through his efforts that Merry and Pippin are freed. It is not Aragorn who rouses the Ents to march upon Isengard. At one point Legolas remarks that they have made this great journey to little purpose and as they journey further into Fangorn Forest Gimli is even more blunt.

“If we do not find them soon, we shall be of no use to them, except to sit down beside them, and show our friendship but starving together.”

Yet Aragorn is serene through all this. “If that is indeed all we can do,” he says, “then we must do that. Let us go on.”

Aragorn has made his choice and once made he will waste no time upon regret. He has done all that needs to be done. We might say that there is some providential link, a synchronicity, between his choice and all the great events that will follow. We might say that if we choose rightly then good things will follow even if we cannot prove a direct link between our choice and the subsequent good. But we cannot prove such a link and Aragorn would not wish to attempt such a proof. He would regard this as an attempt at self-justification and a craven act to which he would never stoop. That is his greatness and the reason why Legolas and Gimli will go with him. And if we would know the peace that Aragorn knows then we too will seek only to make the right choice and then to act upon without regret.