After a journey of wonders the company led by Théoden and Gandalf arrive at the gates of Isengard to find them cast down and in ruins with a great rubble heap piled up beside them “and suddenly there were aware of two small figures lying on it at their ease…There were bottles, bowls and platters laid beside them, as if they had eaten well, and now rested from their labour.” And so it is that after all the adventures that have befallen the company since its sundering at Tol Brandir Aragorn, Gimli and Legolas are re-united with Merry and Pippin.

This is a good tale to tell at Christmas for as Mary’s great song from The Gospel of Luke chapter 1 tells us, with the coming of the Messiah the mighty are cast down from their seats and the humble and meek are exalted, the hungry are filled with good things and the rich are sent empty away. It was indeed Saruman’s intention to bring the hobbits to Isengard but we can be sure that he had no intention to feast them upon the best of his food amidst the ruins of his once mighty fortress. And yet it is precisely because of his intentions that Saruman has been cast down from his seat and that hobbits, the least significant of creatures, have been the means of his downfall. For the orcs that Saruman sent to bring the hobbits to his dungeons were able to bring them swiftly to Fangorn where they met Treebeard, the most ancient of Ents. And it was through that meeting that the Ents were roused from their long slumber, marched upon Isengard and reduced it to ruins.

There is no doubt that Tolkien takes pleasure in the comic elements of the scene he paints for us. The small figures who could not be less heroic, the piles of empty dishes and bottles, the smoke rising from pipes smoked at ease (and as anyone who has ever tried to smoke a pipe will tell you it is necessary to be at ease in order to smoke one well!) and all this amidst the scene of a terrible battle.

And you can be sure that Saruman does not get the joke! Nor, of course, did Herod when the Magi asked him where the King of the Jews had been born. Perhaps we get closest to the truth of Christmas if we learn to see it as a cosmic joke. So much religion seems hung up with efforts to portray itself as mighty, as deserving of a place at the tables of the powerful. If the wonderful joke of the nativity were to manifest itself at such tables then the religious might well be discomfited as much as kings and princes. Before the modern era it was the custom for kings to have a joker nearby them to remind them of who they truly were. Where are the jokers of our own age? How many board rooms of our great corporations make sure they have a joker among them? Or might they fear that the joker might bring them crashing down to ruins?

If Saruman were to get the joke then he would be free from the prison that he has created for himself. And so too would we if, as Mary sang, we allow that which desires to be rich and dominating of the weak within our souls to be “sent empty away”. Our laughter would truly be that of the merry and so would our Christmas too.

It was a year ago, after trying to write a book about The Lord of the Rings for the best part of a couple of years and basically getting nowhere, that I discovered that although I did not seem capable of writing a thousand words a day and constructing whole chapters I could write 500-700 words each week and post it as a Blog. This isn’t a boast on my part but I seem to be able to construct what would be a weekly column if I were writing for a newspaper. And so that is what I have been doing ever since that time. I have been journeying with Frodo Baggins and his companions all the way from Bilbo Baggins’s Birthday Party till Merry and Pippin’s encounter with Treebeard in the Forest of Fangorn after their escape from the Orcs and as I have done so I have written a weekly reflection on each section that I have read. I have not tried to be scholarly. I am just someone who has been reading this great work since being introduced to it by my schoolmate, Jon Flint, when I was about 14 or 15 years old. That is over forty years now and I feel that I have something to say about a book that I have loved ever since that time. I share J.R.R Tolkien’s Christian faith although not his Roman Catholicism. Like Tolkien’s great friend and collaborator, C.S Lewis, I am an Anglican.

Reading The Lord of the Rings slowly and thoughtfully has been a rich experience and I hope that I have managed to convey some of that in my weekly blogs. I have been especially caught up with the hobbits who find themselves in a story that is too big for them. And although they grow with the story they can never become heroic figures like Aragorn or Boromir. All they can do is to offer what they can the best they can. There are some in the story who have great discernment and see this offer as a deed of great worth. Faramir of Gondor is one and so is Treebeard of Fangorn who allows Merry and Pippin to lead him into an adventure that is likely to end with the destruction of the Ents. Come to think of it, both of them allow themselves to be carried into stories too big for them as well. 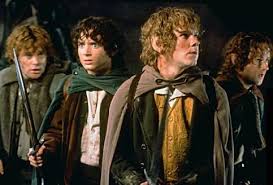 If there is a Christmas message in this (and I hope you won’t mind me for looking for one at this season) then it is the idea of a God who chooses to come among us and to commit himself to the same experience that we know, living a life that is too big for us and yet doing it with faithfulness, joy and love.

If you want to look at any of my earlier blogs from December 2012 to October 2013 you will find a complete archive on my website http://www.stephenwinter.net/page6.htm and whatever you do over the Feast of the Nativity may you do it with joy and delight.