Gandalf and his companions enter Théoden’s darkened hall whose majesty lies half hidden in shadows. Around them upon the walls hang many woven cloths and “over their wide spaces marched figures of ancient legend”. To one in particular their eyes are drawn even before they look upon the king himself because in the dark the light of the sun has fallen upon it through an opening high in the roof. “A young man upon a white horse… blowing a great horn… his yellow hair flowing in the wind.”

“Behold Eorl the Young!” said Aragorn. “Thus he rode out of the North to the Battle of the Field of Celebrant.” 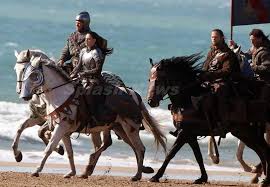 That we should look upon Eorl before we see the king is no accident. Eorl is forever young and Théoden is old; very old indeed. He is a man “so bent with age that he seemed almost a dwarf.” Eorl is bathed in sunlight while Théoden is hidden in the shadows. Tolkien means us to gaze upon Eorl in his majesty because that is where Théoden himself looks and what he sees acts as a constant reproach to him. Eorl rides to battle, to victory and to glory while Théoden sits helplessly by as he hears daily of defeat, of the death of his only son in battle and of the impending doom of his house and of his people. Almost his last words just a few weeks later at the Battle of the Pelennor Fields will be, “I go to my fathers. And even in their mighty company I shall not now be ashamed.”

Théoden has been ashamed, literally crippled and shrunken by shame even as Wormtongue’s whisperings have steadily weakened his resolve. Faced by the dangers that surround him he has withdrawn behind the diminishing safety of his own walls yet even there the image of his mighty ancestor rebukes him. Age must come to us all if we live long enough to see it and many find that the world about them becomes a more fearful place. Tove Jansson, writer of the wonderful Moomintroll stories, summered for many years on an island some way off the coast of Finland. One day she stepped out of her hut on the island to gaze upon the sea and she was suddenly afraid, a feeling she had never known before in that place. When she left her island as the summer ended it was to be for the last time. She never returned there again.

Théoden is freed from the prison of his own walls by Gandalf. We will think more about that next week. He will then throw himself into life for a few brief and dangerous days before finally falling in battle before the walls of Minas Tirith. Those for whom the most important thing in life is to achieve security will find Gandalf’s behaviour reprehensible and Théoden’s foolish. What kind of care for the aged is it that counsels leaving safety and care and going into battle? Yet Gandalf’s counsel will enable Théoden to break free from fear and from shame and to die a free man. Who would deny him this? And which of us are in danger of denying freedom to ourselves and building darkened prisons for our own souls?