Treebeard has lived for ages beyond the reckoning of almost every living creature, except perhaps Tom Bombadil. He has seen the rise and fall of many kingdoms, the glory of Gondolin and Nargothrond and the terrible might of Angband and its master, Morgoth. And he has weathered all this like a mighty oak delighting in the summer sun and standing fast against the storms of winter. To live through all that he has seen has required above all the ability to survive, to harvest whatever is given, to store when necessary, and to endure, always to endure. “I do not like worrying about the future,” he tells Merry and Pippin. For him it is enough to live each day as best he can, fulfilling the task given to him to be the shepherd of the trees.

But now he is prepared to risk all upon an attack on Saruman’s stronghold of Isengard, an attack that may well see the end of the Ents and their age long vigil. “It is likely enough that we are going to our doom,” he says, “the last march of the Ents.”

When the human enterprise is reduced, either to a desire to dominate others for the sake of our own aggrandisement, or in a bid to build fortresses about ourselves when domination no longer seems to be a possibility in order to preserve whatever we can hang onto then this enterprise has been given over to the mean and diminished spirit of Saruman. There is a right and proper desire to conserve what is good, true and beautiful, but as Gandalf says to Treebeard, “You have not plotted to cover the world with your trees and choke all other living things” as Saruman has done, choosing at the moment of the wreck of his ambition to hang onto the shreds of his desire rather than submit and so become a servant once more. 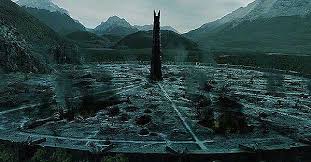 Perhaps, like Treebeard, we will rightly give much of our lives to the building and preservation of some goodness in the world, a home where children can be raised and guests welcomed. Such a life is a good life and worthy of respect. It is when our homes become mean places set in competition against the need of others, with doors and windows permanently barred and shuttered, that they diminish and we with them. And the same is so when we become incapable of risking what we have for the sake of a greater good. Patrick Kavanagh expresses this in his wonderful poem, “The Self Slaved” when he declares:

Me I will throw away.
Me sufficient for the day
The sticky self that clings
Adhesions on the wings
To love and adventure,
To go on the grand tour
A man must be free
From self-necessity

Kavanagh discovered this freedom after being successfully treated for cancer and sensing that he had been given his life back again.

In the poem he discerns a meanness of spirit from which he has been liberated. Now he can truly live life. He goes on to say:

I will have love, have love
From anything made of
And a life with a shapely form
With gaiety and charm
And capable of receiving
With grace the grace of living
And wild moments too
Self when freed from you.

Treebeard knows this spirit and in marching on Isengard he gives himself up to such a wild moment with joy. Happy the one who knows how to do this, whose life does not shrivel up in meanness and diminishment.