It is not necessary to have travelled far in order to have an imagination that extends beyond the boundaries of one’s own lived experience but it is necessary to wish to have done so. On an April evening after a rainy day Sam Gamgee and Ted Sandyman sit opposite one another by the fire of The Green Dragon in Bywater and the regulars of the pub gather about them. They expect a debate between the two hobbits and they are not disappointed.

By the rules of bar room debate Ted Sandyman is more skilled at the art and if a quicker wit were to guarantee success in life then he would have been the happier of the two. There is little doubt that the assembled company consider that Ted is the winner and certainly Ted, himself, thinks so, but Sam will end his days honoured by all and Ted…?

We never find out what happened to Ted after Saruman’s gang is driven out of the Shire. The last time that we hear of him is when the victorious hobbits, fresh from the Battle of Bywater, are marching upon Saruman’s headquarters in Bagshot Row. Ted still regards himself as Sam’s superior even then. “You was always soft,” he sneers at Sam and even when he sees the hobbit host he still believes that his horn will summon a force of men sufficient to put down the uprising.

Of course the men would never come so what happened to Ted after that? There are two possibilities. The first and the most hopeful is that after a lifetime of small-minded mean spiritedness Ted comes to realise what a fool he has been and that he realises too that to think of oneself as a fool is not the worst fate that can befall a person. Indeed it can open the door to happiness. Ted could lay down the burden of what he considers to be his dignity, something that he has always regarded as more important than happiness, seek to make amends for the harm that he has done to others, and to put his mill to use in the service of the Shire at a difficult time. If he were to do that he would almost certainly find that his fellow hobbits would be quick to forgive and he would live out his days as a useful and contented member of his community.

That is one possibility. The other would be that he would retreat into his last remaining possession, his resentment, and nourish it as if it had the ability to feed him. He would hate Merry and Pippin as entitled members of the old gentry of the Shire, a class from which he has always felt himself to be excluded, and he would hate Sam even more because he would see Sam as having achieved the thing that he had always desired himself but now could not have. If he chose the latter pathway would he be able to remain in his mill, serving a community who knew what he had done as an enthusiastic collaborator and whose contentment he would always hate? Or would he, like Bill Ferny, have withdrawn to the edges of things to eke out a miserable existence through small, mean and nasty acts.

I will allow my readers to decide this for themselves. For myself, just as Frodo did with Lotho Pimple even after he saw the destruction of his own home, I will hope for Ted Sandyman. Frodo continued to hope for Lotho, not because he had scaled some moral height, but because of his own sense of failure in not being able to cast the Ring into the Fire. Frodo does not feel alien from his cousin. They have both fallen. Perhaps Sam will not feel alien from his old sparring partner from The Green Dragon.

But on this April evening after the rain all of this lies in a future beyond events that will change all of their lives. Sam, the hobbit with a ‘soft’ head, will follow his longing to see wonders and he will go with Frodo through terrible hardship unto great glory. While Ted will never see beyond the next successful deal and the next one and the next one until he falls with Lotho Pimple, the hobbit he has most admired, the one who could have written a book about making successful deals. 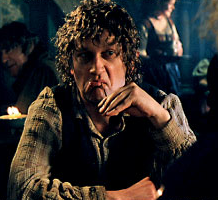 If you click on the tag, Merry, at the foot of this post you will find a series of reflections on his progress through The Lord of the Rings at least since I began to publish them on WordPress in October 2013. At that point I had just begun to read The Two Towers and so my first encounter with Merry was as a prisoner of the Uruk Hai of Isengard. I intend to return to The Fellowship of the Ring later in the year and hope to do it better justice than I did when I wrote my early reflections on another website. But even though the reflections on Merry’s early story are missing from this blog I hope that you will see that they do form a true “pilgrim’s progress” as do all of the stories of the major major characters in Tolkien’s great tale.

Merry’s story is of a soul formed through a fall and a rise and if you have already noted that this is the opposite direction to the journey that Lotho Pimple takes and that we thought about last week then you are right. The tragedy of Lotho’s story is not so much that he fell but that he did not live to face the truth about himself and so to rise again. I wrote last week about gaining the world and so losing the soul. Lotho never saw the grace of losing the world before Wormtongue murdered him.

Merry begins The Lord of the Rings as a competent organiser just as he is at the Battle of Bywater when he takes command of troops who have no experience of battle but plenty of spirit and leads them to victory over Saruman’s brigands. Merry slays the leader of the outlaws who, if he had known that the hobbit that he faced had done battle with the deadliest warrior of the Age and lived to tell the tale would never have dared to confront him.

At our first meeting with Merry he is the “leader” of the conspiracy that seems to know more about Frodo’s business than he does. He has food, hot baths and ponies organised at Crickhollow and a secret escape route from the Black Riders through the Old Forest about which he also has local knowledge. But as soon as he is in the forest he is out of his depth, he has to be rescued from Old Man Willow by Tom Bombadil and he remains more or less out of his depth for the rest of the story.

Which of us is ever at our ease in being out of our depth? I mean, truly out of our depth, beyond our competence and in an unfamiliar element? For much of the story Merry sees himself as no more than unwanted extra baggage in someone else’s story and yet without realising it he is becoming at ease with unfamiliarity, at ease with the sense that each experience is beyond his capacity to cope with. And so, without being aware that this is what he is doing, he wins the trust of the mistrusting Treebeard and so brings about the fall of Isengard and it is in “being overlooked” at the Battle of the Pelennor Fields that he aids Éowyn in bringing about the fall of the Witch King of Angmar, the Lord of the Nazgûl. And he achieves all this because he is one who lives for love. Love for the Shire, love for his friends and love for those, like Théoden and Éowyn, who give their love to him.

And now, back on familiar territory, battle hardened but not heart hardened, he deploys his troops swiftly and effectively and so brings to a speedy end the occupation of the Shire. Does he know how he has made this journey and why he has become such an effective leader? I suspect not. But neither does he mind. It is enough that the work is done and that the Shire can begin to be healed once more but we can enjoy the growth of his soul and love him just as do all who know him well.